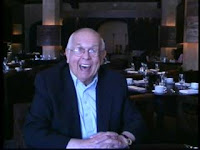 A lot of odd things happen to me, or around me. A lot. And maybe I shouldn't regard them as "odd". Maybe I should refer to them as "interesting". So, a lot of interesting things happen around me. Latest case - yesterday, Wednesday January 9, I spent a good portion of the day quasi-editing some video footage I wanted to load here (and on another affiliated site - http://www.freewebs.com/kyhu2q/). But I ran out of time before I could actually load any images. I had a few other previous engagements, so I never even started the process of loading the images. I only got as far as transferring footage onto my computer.

But, so the "interesting" part of this story is that much of the footage I was editing was that of the interview I did with Hollywood's honorable and legendary mayor, Johnny Grant. Although the interview was done in August 2006, I feel like I just spent the day with him (Wed. Jan. 9), since it was his footage I'd spent the most time working on. There he was. There I was. And yeah, as I edited yesterday, I was thinking, "Wow, I'm interviewing this legendary figure. How cool is that?"

So, I'm saddened to hear the news about his passing later Wednesday evening. He was a jolly, cute fellow. Not sure how comfortable he'd be knowing I just described him as cute, but he was cute. He had a great, cheerful smile and a cheerful spirit. And he was Hollywood. Mr. Hollywood. The King of Tinseltown. I'm glad for my opportunity to meet and interview him. I'm also bummed that I'm not presently in Los Angeles to join the hordes of people who will, no doubt, be honoring him. But I at least get to visit him as often as I'd like, via my interview.

Farewell, Johnny Grant. Farewell.
(For a transcript of the interview - and other productions of Look, Ma! Productions - send inquiries to televisionproducer@yahoo.com with "Transcripts" in the subject box.)
Posted by The Kid at 11:23 AM