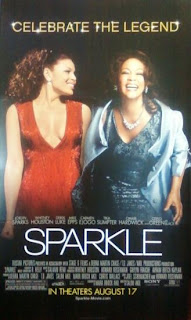 Not going to tell you NOT to see it. Not going to do that. However, I was not as... I wanted... The film didn't grab me as emotionally as I wanted to be grabbed.

I miss Whitney, and it was nice to see Whitney on the screen. Whitney was playing a mother, and you know what? She looked like a mother.

Let's jump to talking about Carmen Ejogo. She's THAT gifted, that I don't even recognize her when I see her. For starters, Carmen Ejogo is British. Couldn't tell it in Sparkle. And the whole time I kept asking myself, who is THIS person playing "Sister"? But I know who Carmen Ejogo is, but she's such the consummate "faceless" actress that I simply didn't realize it was she. That's a compliment!

Anyway, I'll edit this at another time. Just wanted to post this today, since Sparkle opened today - Friday August 17, 2012. I say GO TO THE FILM, mostly for support; in honor of the memory of Miss Whitney E. Houston.

P.S. Big ups to Debra Martin Chase, too - 'cause I love a story about Black women producers - a credit Whitney has held, as well.
Posted by The Kid at 6:50 PM No comments: